Travelling time again, first we caught the public boat to Bangsal Harbour on Lombok. Just as the boat touched the beach the locals rushed off it, we took our time and geared up with all our bags, Iben let a “helpsome” local carry her big bag off the boat, he was already halfway on the beach before Erik realized it and told Iben that it was a bad idea to get help, because the guy would expect some money for helping out.
Luckily Iben has already toughened a bit up, so when she handed the guy 700 Idr. (roughly 40 danish øre) he got so disappointed, that she got her backpack AND her money back, he was asking for 10.000 Idr. (5 Dkr) - maybe it was a bit rude and insulting, because it’s the way those people make their income, helping loading and unloading the passengers luggage, but it’s also rude to assume that everybody will pay for getting into their trap.


Next experience was kinda the same, just the other way around, we still had an hour drive to our destination Senggigi, but we first had to find a taxi to take us there, we knew that the price should be around 80-100.000 Idr. So we started walking towards the bus station, where the Bluebird taxi’s are located.
On our way, we got asked a hundred times by local drivers: Transport, transport, at the same time they hold there hands like they’re holding on to a steering wheel. Of cause they offered to drive us there, but for a larger amount of money. So we told them that we already knew the price, and that we were going to take a bluebird cab.
Eventually a guy in a minibus said: Okay, okay 80.000 Idr. Perfect! We jumped in and drove for 2 minutes, he stopped and said, he just had to give his daughter some money, after 5 minutes he was back, and we left Bangsal. Sadly the drive didn’t turn out as we expected, after 10 minutes he stopped another car, a old truck, with wooden seats in the back, a so called bemo. He told us, that his left front tyre was flat, so we had to do the rest of the journey with his brother.
We got very annoyed, because we knew this was a trick, first you agree on a certain price, but the price you agree on, is for the new nice car, with air-conditioning and good comfort, and then when they have taken you too far enough out of town, to find another transportation option, they stop the car (which has had the flat tyre all the time), and then they make you drive in the old shitty car, for the same price, and if you resist it, they leave you out there in the middle of nowhere.
Luckily for us, the price we agreed on, was the same it would have costed for the bemo to start with, so no extra costs for us, just worse comfort.
But before we totally agreed to jump in the other car, the first driver got very angry with us, because we didn’t believe him, and in the end of our discussion he ended his sentence with; “This is my country, I can kill you here!” This definitely was a clear call, but it was easy to tell that he was just upset, and he did not at all look like a guy with the balls to do what he said. It still made the situation a bit more intense, especially when Erik tried to bargain the price down from 80.000 to 60.000 because of the lower comfort level. He didn’t succeed, but we carried on anyway with the original price, and in the old truck. We were concerned if our new driver would make any troubles on the way to Senggigi, but he had a much nicer personality.
In the township of Senggigi we checked in at Oz Stay Hostel, a huge but almost empty hostel with good facilities. Erik and I planned to do some special dives on the southern part of Lombok, near Belongas Bay. The dives are known to have a lot of current involved, and only experienced divers with at least 50 dives are allowed to dive there. Scuba Froggy are currently the only dive company diving there, and they have an office in Senggigi where we would arrange our dives from.

After staying up late the night before, Erik and I slept in. Meanwhile Iben went on a scooter trip to see some waterfalls and rice fields in the north of Lombok. Our day went by with working on the blog, and arranging the last details for our dive excursion the next day.
Iben got home totally soaked in the afternoon, they had been unlucky with the weather, as soon as they reached the waterfalls, it had started raining, so she had a long warm shower before we all ventured out to try the local food market. It was undoubtedly one of the worst food experiences, the food tasted awful, and the small chickens that both Erik and Iben ordered looked like newborn chicks, there were absolutely no meat on them, but they were served as whole chickens - still with the heads on and everything... Very bad experience, but again it was an experience... Especially for Iben, as she couldn’t get herself to pull the head of the chicken, and Erik refused to help her, so she had to eat the chicken with the head looking at her...
Ha ha, well she is definitely getting more and more use to the way of living around here.

The transfer bus from Scuba Froggy picked us up early in the morning, Iben wasn’t diving with them but they allowed her to pay a little fee for the transfer to Kuta beach.
The outrigger boat seemed vulnerable on the open ocean which this day offered severe swells. I was a bit nervous if the small boat would survive the long journey or not.
When we spotted dolphins the captain stopped the boat for a moment, and it made me calm to feel the swells, without the engine running. As mentioned before the dives can be a bit dangerous due to the strong currents going in all possible directions. We were one on one with an instructor each, which also gave us a hint about the severity of the dives.
At the first dive site called: The Magnet, which is a big rock with a lighthouse on top, I jumped in the water with my instructor, Tomas. The plan was that all four of us should go down on the same time, but while we were hanging on the side of the boat the swells and currents made it impossible for us to hold on any longer. We let go of the boat and I got caught in the waves rolling towards the rock. The waves were huge and when they were on their highest they almost covered the rock, there was about 3-4 meters difference from highest to lowest. I was getting quite nervous for a moment there, so Tomas told me to go down. It was easy as the current was down going and within seconds we were on 23 meters depth. But unfortunately we didn’t get down to the right spot on the rock wall, so we had to surface and try again. I actually didn’t know what was going on when this happend as I didn’t check my dive computer at all. Thomas grabbed me and fully inflated my BCD, this will usually send you straight to the surface, and is something you NEVER do as a diver, but we were still stable on 20 meters. That’s how strong the down current were.
We got out of the current and went back on the boat to try again. Meanwhile Erik had jumped in with his instructor Sascha, they had been more lucky to get on the right side of the rock where there was less current, all though they still had a strong down going current. Within seconds they had reached 41 meters depth, and within the next 5 minutes they saw a eagle ray, a turtle, many reef sharks, very big schools of Trevallys, hammerhead sharks circling above them and the largest school of Barracudas Erik has ever seen. When we met them underwater at our second dive attempt, they both showed off by signaling the dive sign for hammerheads while dancing around in the water.
I was so happy for Erik, as that was his biggest wish to experience - but I couldn’t help giving him the international finger sign for “screw you”, anyway.
Back on the boat they were so overwhelmed by happiness, it was great... For them!
Apart from Tomas getting caught in the currents again, the next dive at: The Cathedral, was more successful.
I jumped in with Erik and Sascha, and he kept banging his tank until Tomas had found us underwater. We had two olive sea snakes following us, they are listed as the most venomous of all snakes. Obviously we didn’t enjoy that, they swam in between my legs and at one point I hit one of them in the head with my fin. Luckily the hit didn’t upset it, but it wasn’t enjoyable to have them this close to us.
I was relieved when we reached the surface again, and I just wanted to get away from there.
Both of our dives were short, because they were deep dives, but also because we used our air so quickly from working against the currents all the time. It was definitely a big experience and challenge to dive in so strong currents.
Back in Kuta Iben had arranged a shared room for us on Banana Homestay. This was a place filled with Scandinavian and north European people, which were practising their surf skills on the surrounding beaches each day and drinking Bintang’s every night.
We were too tired to socialize this day, so we went out for dinner by ourselves and went to bed early. Iben met some other solo travellers and spend the night with them.

We rented a motorbike and drove to Mawun beach with Iben, a guy named Razhid and a girl that Iben had met - both Germans. It was just a lazy day on the beach. Razhid was a nice bloke with his heart and head in the right place, the girl on the other hand was annoying. We lost it completely when she started telling us that she became a vegetarian, because her sister got cancer, and to support her sister she stopped eating meat, because it’s bad for the body, but she continued smoking, drinking and riding motorbikes WITHOUT a helmet. Very clever girl! We did our best to put up with her throughout the day, and we even arranged to watch the sunset together on a nearby hill, together with other sunset junkies.
Kuta on Lombok attracts a lot of young people, as it’s all about catching waves and getting drunk. It’s a small town but it’s got a reputation of a lot of crime. All the long-terms we talked to on Banana Homestay are very cautions about going out at night, and specially driving out of town at night. There should be some strange natives around.
Personally I don’t understand why so many people are staying here long-term as it seems like everybody is afraid of going out. This is also the reason why we left the hill and the sunset before it got dark. Back at Banana we squeezed in on one of the small porches in front of a room and one Bintang took over the other, while we shared stories with strangers from around the world. 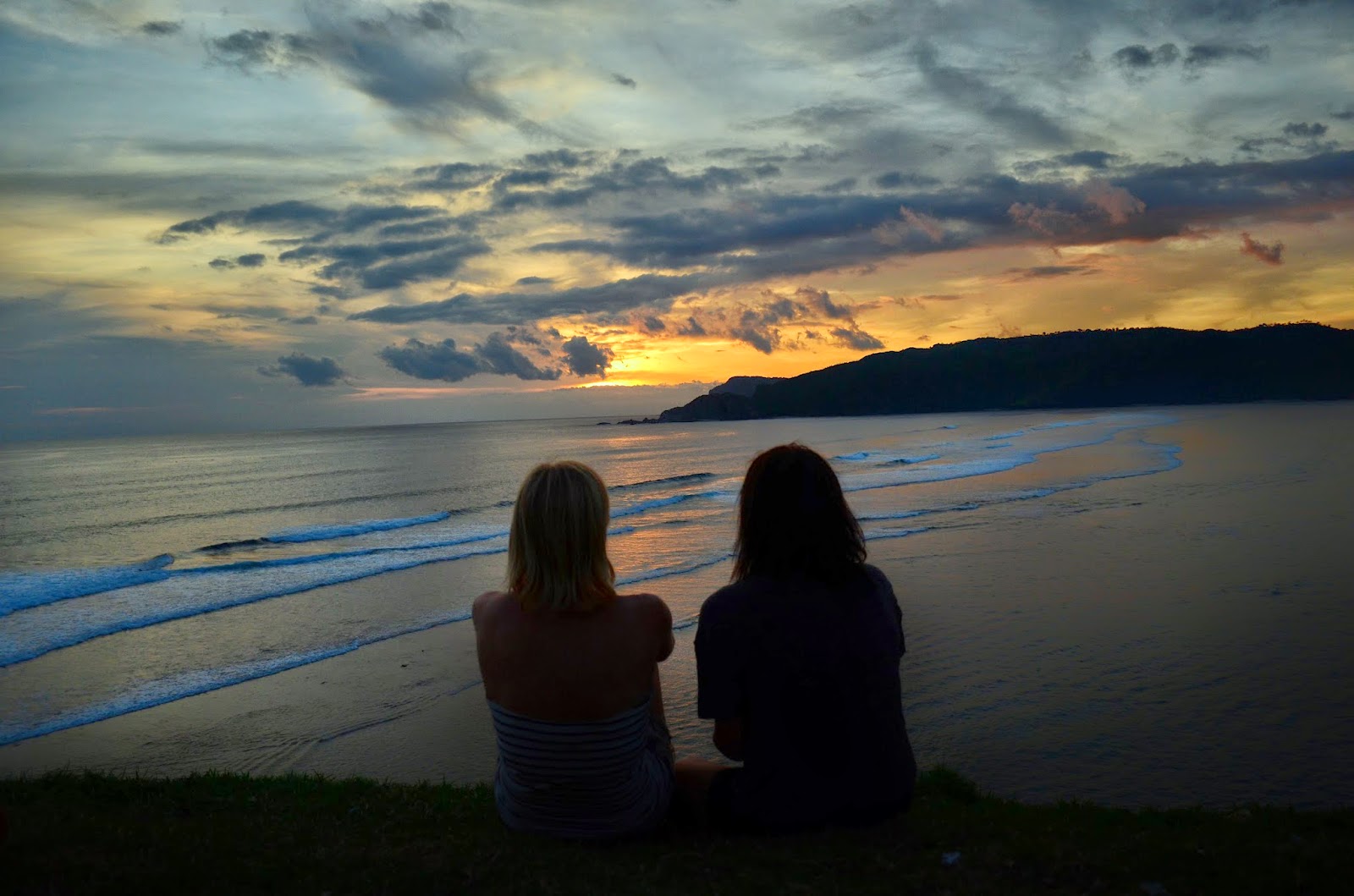 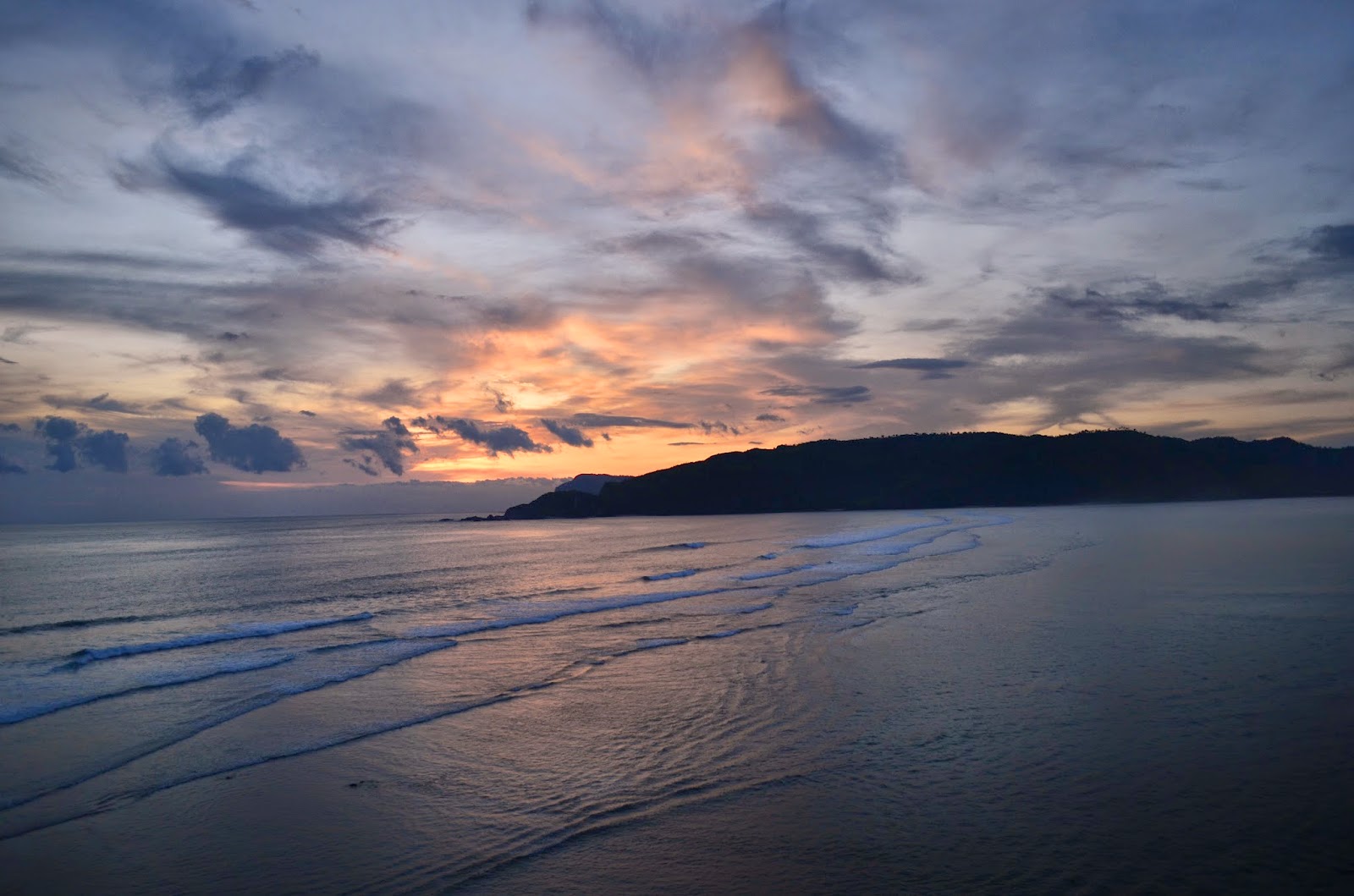